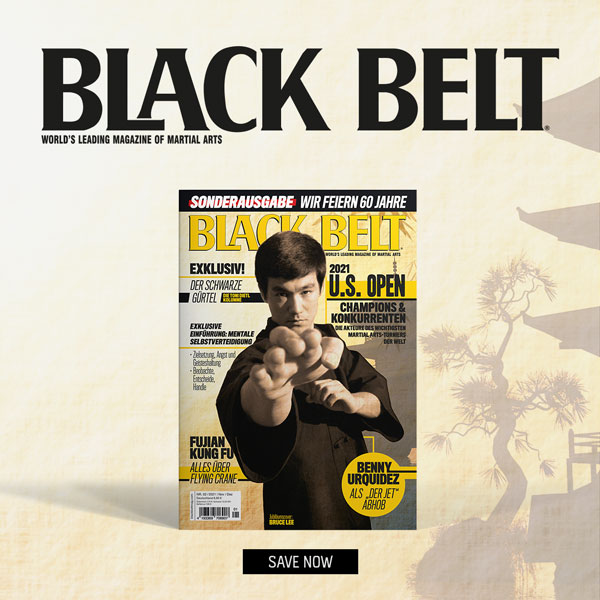 The BLACK BELT Magazine - NOW get the second GERMAN edition for the 60th anniversary. With reports, interviews and columns from the USA and brand new content from Germany!

The martial arts magazine in German, available for free sale at station bookstores, newsstands, supermarkets or your dojo.

Get NOW the BLACK BELT magazine as an anniversary edition.

This year, the big anniversary year on the occasion of the 60th birthday of the BLACK BELT magazine, we let appear for the second time the German-language edition in Germany, Austria and the German-speaking parts of Switzerland, Denmark and Benelux.

GET THE GERMAN ISSUE HERE

At CENTURY MARTIAL ARTS Martial Arts is much more than just a sport. It is lifestyle, it is passion and that is exactly why BLACK BELT magazine offers news as well as picture series with effective and innovative techniques to expand your repertoire! In addition to exciting reports on the latest martial arts events and the various martial arts, you will get interesting insights into the life and training of the grandmasters of our time and those who want to be. Take advantage of the exclusive content and tips to efficiently improve your training program and get the most important information about the latest products from CENTURY MARTIAL ARTS.

In our second issue, we will feature the first column by German martial arts legend Toni Dietl, an anniversary cover of Bruce Lee and our big report on the U.S. Open 2021.

From January 2022 we will even appear every second month, and will also be available by subscription! If you are interested, please contact us directly.

BLACK BELT magazine was and is the largest international martial arts magazine. Our German edition also has an international flavour. In our second issue there are now also additional columns, reports and interviews with many German-speaking martial artists, successful martial arts entrepreneurs and representatives of the guild.