BJJ VS JUJUTSU: WHAT'S THE DIFFERENCE?

Most of us have been guilty of it at one point: confusing Brazilian jiu-jitsu with jujutsu. Some of it boils down to wording. For example, if you hear someone say “jiu-jitsu” by itself, they could be referring to either BJJ, or Japanese jiu-jitsu, also called jujutsu. Despite the similarities in names, however, BJJ and jujutsu (also called Japanese jiu-jitsu, also called jiujitsu… you see why this is confusing?) are two distinct arts.

Many people are familiar with Brazilian jiu-jitsu (BJJ) due to its use in contemporary MMA competitions, but not everyone is as aware of jujutsu. In fact, it is common for people to incorrectly use these two terms interchangeably (or to refer to BJJ as simply “jiu-jitsu”). While Brazilian jiu-jitsu has its roots in traditional Japanese jujitsu, there are many notable differences in both of these styles today.

The Origins of Japanese Jujitsu

Traditional jujitsu is often regarded as one of the earliest types of martial arts to ever be taught. It was a large influence in both the development of judo and Brazilian jiu-jitsu. Some believe this centuries-old martial arts originally started among Buddhist monks as a more peaceful method of self-defense that did not require the use of weapons; however, one of the first known uses of jujitsu was actually on the battlefield by the samurai. While these warriors would still use weapons in battle, jujitsu was an effective form of defense in situations where hand-to-hand combat was necessary, such as when a weapon was lost. 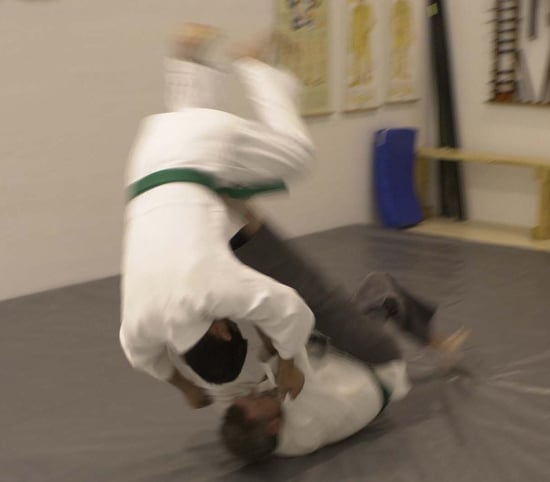 A sacrifice throw in Japanese jujutsu.

When used in the military, jujitsu was focused mainly on grappling methods like powerful throws and joint locks. While this martial art is still currently used by military and law-enforcement in modern settings, it has changed greatly over the years to be incorporated safely as a civilian sport that also includes kicking and striking movements. Respect and traditional elements are still very important to modern jujitsu.

The Evolution of Jujitsu into Brazilian Jiu-Jitsu

The development of BJJ was dependent on the progression of jujitsu into judo. In the late 19th century, jujitsu techniques were evolved into judo by a man named Jigoro Kano. 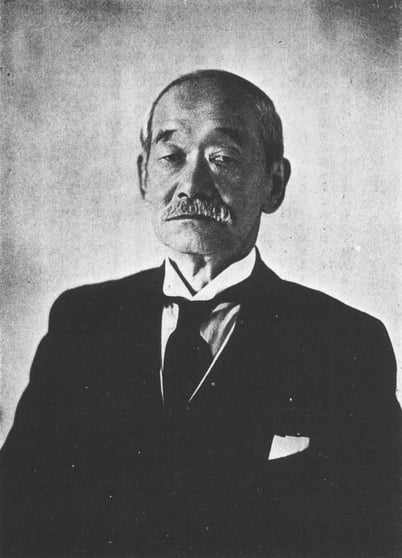 Kano, who was 5’2” and weighed less than 100 pounds, adapted the art to rely less on strength. He also placed a greater emphasis on personal development and defending oneself against an attacker by throwing them off balance. This martial art does not involve any kind of kicking or striking techniques, the use of weapons, or placing pressure against joints during throws. Rather, it relies on focused throwing techniques, chokeholds, and joint locks.

By the early 1900s, judo had grown in popularity and made its way to Brazil after Mitsuyo Maeda, a student of Kano, started teaching judo there. One of Maeda’s students in Brazil was Carlos Gracie, who was interested in the ground fighting aspect of judo. This resulted in the beginnings of Brazilian jiu-jitsu. 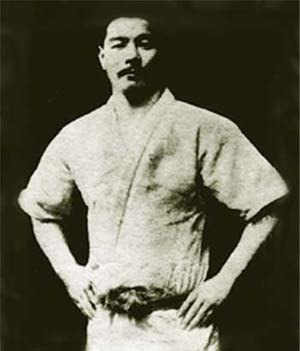 When using BJJ, the goal of the fighter is to bring his or her opponent to the ground and to then place an opponent into a position that forces submission by focusing on both leverage and grip. Like judo, this martial arts allows smaller, weaker individuals the ability to defend themselves against a bigger opponent. While Brazilian jiu-jitsu is one of the most popular types of martial arts used in MMA competitions today, the sport itself focuses on grappling and does not involve kicking or punching.

In addition to being useful in the realm of MMA, BJJ is also very effective in a real-life situation in the case of street fight or situation where self-defense is necessary. A majority of street fights are taken to the ground, which is what makes this style of martial arts so practical. Even children, women, or people of smaller stature can protect themselves against someone much larger than them using the techniques learned in Brazilian jiu-jitsu. 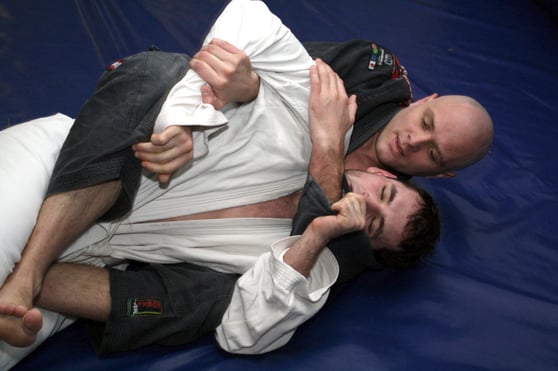 A back mount in BJJ.

Although jujitsu is hundreds of years old, it still relies on many of its original principles and techniques. Since this martial art was originally developed for samurai, Japanese jujitsu is suitable for real-life combat situations. It is often taught in a very traditional setting where discipline is greatly valued. Brazilian jiu-jitsu, on the other hand, is primarily used for sport with a primary focus on grappling. For this reason, some of the techniques taught in BJJ may not be applicable in a real life situation, but will win points in competition.

While both jujitsu and BJJ are closely related to one another due to their connected histories, these styles are very different in how they are practiced and applied in the world today. Understanding the difference between these two styles allows beginners to choose which style they are interested in learning and improve their overall knowledge of martial arts.