THE RITUALS OF MUAY THAI

Youre probably already familiar with the brutality and beauty of muay thai. This ancient art of warriors and kings is heavily favored in modern MMA, and. However, muay thai tradition has a long history of rituals, superstitions and unique cultural views that are less common. Here is a brief history of the origin of muay thai and some of its more common rituals and meanings.

What Is Muay Thai?

Unlike kickboxing and boxing, muay thai uses every part of the body. In fact, it is known as "the art of eight limbs:" two knees, two legs/shins, two arms, and two elbows. Its powerful offensive capabilities make it a popular form of martial arts for the most vicious MMA fighters. It also has a more elegant side. Some moves create an almost dance-like grace.

Like most martial arts, muay thai moves are often blended with other fighting styles to create a mixed martial arts approach that works for MMA or other fighting traditions. Because of this, the rituals and history of muay thai are typically pushed to the side or completely forgotten in Western gyms.

The beginning of muay thai is shrouded in religious lore and ancient history. One story tells of ancient Thai warriors using these techniques on the battlefield. However it began, muay thai became a popular sport during the reign of King Prachao Sua in Thailand. 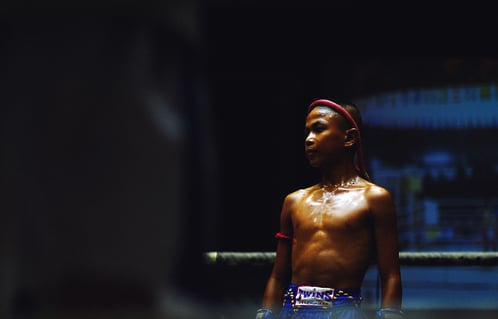 If youve never heard of the Wai Kru Ram Muay before, youre not alone. Many muay thai practitioners and events miss out on this integral tradition. Unless youve witnessed authentic muay thai in Thailand, youve probably never seen this graceful, unusual tradition.

Its best to break it down into each individual piece. First, the Wai is a bow. This slight head bow appears like a prayer and is a sign of respect. It is used in a wide variety of situations to show respect. Depending on how deep the bow and high the hands, a range of respect can be shown. Its also a way to apologize, pray or say thanks.

The word Kru stands for guru, or teacher. This is the person who helped create the muay thai fighter, so deserves a large amount of respect. Just like many other traditional martial arts, muay thai reserves a great deal of respect for its leaders and teachers.

Ram Muay literally means, dancing boxing in Thai, so the dance of the boxers is a critical part of the ritual. Just like a musician warming up or a baseball player taking a few swings, this elegant dance serves a few purposes. First, it is a way to stretch, warm up and prepare for the impending fight. Second, its a chance to show the particular teacher and region to which the fighter is indebted. Finally, its a way to strut in front of the audience and intimidate your opponent.

The Sarama, or Thai music, starts the entire Wai Kru Ram Muay ritual. Traditional muay thai fighters will bow in each corner of the ring, spiral to the center and begin their Ram Muay ritual. Overall, the ritual allows an incredible range of diversity for individual fighters to express respect for royalty, their teacher and the Buddha.

Another muay thai tradition you may have noticed is the unique headband and armbands worn by muay thai fighters. The headband is called a Monkgol and has special religious and ritual meaning.

The Monkgol began as a piece of fabric from a loved one. This could have been a piece of clothing, and was used to bring good luck. Some trainers remove the Mongkol during the match and place it in the corner. Similarly, the Pra Jiad, or armbands, are thought to bring luck and are small portions of fabric around the arms.

These pieces of clothing are highly ritualistic. Even non-religious fighters typically have a Buddhist monk bless the Mongkol for good luck before the upcoming match. This piece of clothing is not only used to represent the fighters family, but also their gym.

Now that you know a little more about the rituals and traditions that surround muay thai, you may have more respect for this classic fighting style. The vicious, yet graceful, nature of Muay thai have made it popular among fighters all over the world. Find a local gym to learn more about this dynamic martial art and learn more about its long history of rituals.