The NASKA World Champion and member of the famous Team Paul Mitchell Karate has a long list of martial arts records and create some famous Point-Fighting memories around the world.

As a martial arts driven company, operating worldwide, we are proud to have pro athletes like Laszlo in our team. As all our  brand ambassadors we are supporting their work and competitions and Laszlo had been infected with CENTURY competition gear a long time ago. We are happy to have as a martial artist and to get his feedbacks on products and experiences from the competition world.

Laszlo is giving seminars around the world and is preparing his life after the professional carrier. If you want to know more about his life and his work, you can find an interview with him on our ambassador section at our website and here you will find the links to follow him. As another plus for customers around the world he is equipped with a ambassador code so this followers can safe on next purchase of competition gear, uniforms and more on CENTURY-Europe.eu

The cooperation with the 6-time WAKO Champion started during the famous Martial Arts SuperShow Europe 2018 in Dortmund and we are doing the next step with him right now. 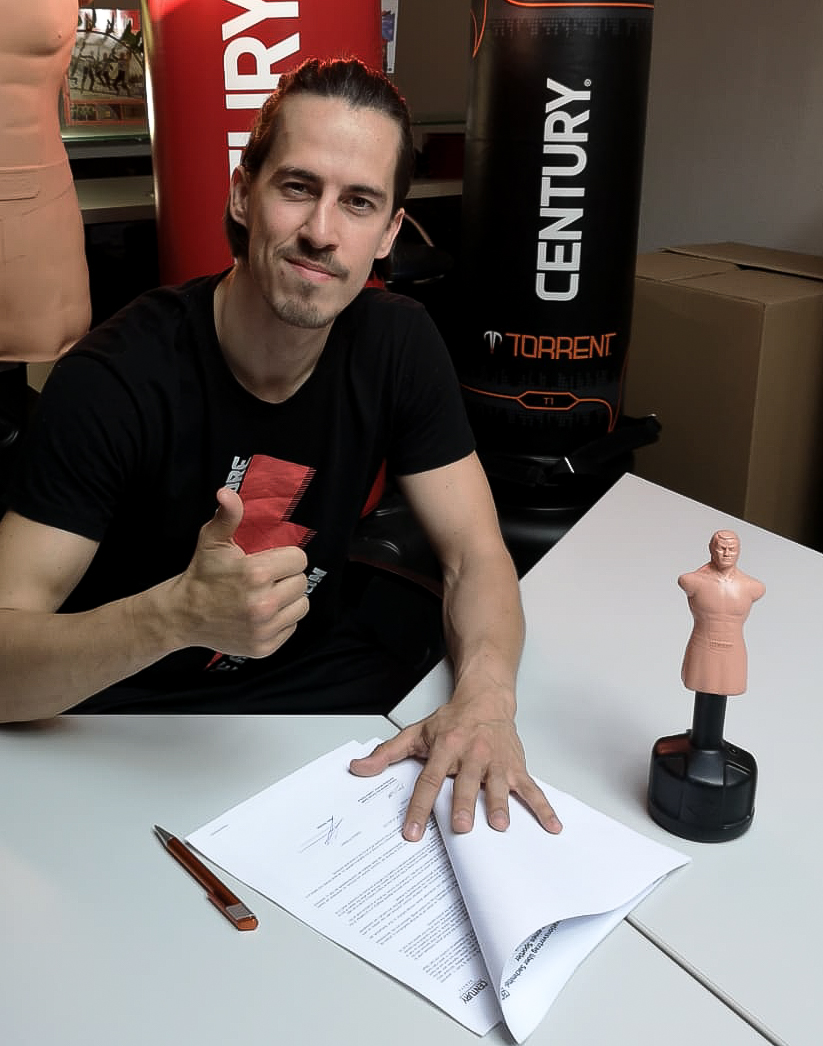 CENTURY-EUROPE: Laszlo, what had been the spark that lighted your fire for Martial Arts and Point-Fighting especially?
Laszlo: The question is that what was the reasion why I started, I could say because of my Parents, both of them did Martial arts when they were young. Or I could say because of the movies from the 90s. ( like Karate Kid, Mortal Combat).  Both of them are right, but the question is why I stayed with the Martial Arts. I met first time with martial arts when i was 6 years old. One day an Aikido Trainer came to the Kindergarten to teach the kids. at the beginning 30 kids registered (I was there, too) for the training but after 1-2 months, only a girl and me stayed before the Coach.  Well because of the few headcountes, the Coach stoped this course, and he invited me in his Dojo,but I was to little and the Dojo was to far from my home. So after a little bit later, my Parents found an another Club. This Place helped me to find my right way in my life. When I steped into this Dojo, I already knew that I wanna do this sport, and I wanna be the best in it.  As a little guy who came from a poor district the sport can help to raise him up, and help to be somebody in the life, thats why I choosed Martial Arts, to be a good person and an example for the people.
CENTURY-EUROPE: What are your favorite styles and what is a Martial Arts Style that you never felt in love with?
Laszlo: Of course my Favorite Styles is Pointfighting, Since I started Martial Arts, I learnt  in 90% this style, maybe thats why our team were really succesful in Pointfighting , we focused only for one style. Well I can not say any style what I dont like, Forexample I like to watch every Style, but sometimes Im just a little bit sceptical with them. every sport has its own beauty.
CENTURY-EUROPE: What had been the circumstances to become a member of the famous Team Paul Mitchell Karate Team?
Laszlo: Well, telling the whole truth, in beginning I always focused my career, and I didnt care about any other teams. I just trained hard to be the best in Kickboxing. One of my PM (Team Paul Mitchell) Coach Steve Babcock (Wako USA National Coach) in the team told me, that they followed my development since 2008. I fought against one of their strongest fighter in Naples at the Junior World Championship, and I beat him with TKO (10points difference). After 4 years in 2012 Team Paul Mitchell sent an e-mail to my Coach, that they would like to see me in the Team. And of cause we said yes - but why?Not just because we had opportunity to travel to the States, but because of the new Challenges, and of course because of the History behind the Paul Mitchell Team. With this step I was one of the first European fighters who have worn and fought in the American Team Uniform.I do not know any other professional Karate team like Team Paul Mitchell Karate.
CENTURY-EUROPE: What are the main differences between European and US tournament and competition industry? What are the most important organizations worldwide for you?
Laszlo: For me everything is different, both continent has an own rules. We usually fight in the WAKO in Europe thats the strongest and biggest Kickboxing Organisation in Europe, but when we fly to the States, we have to fight in ISKA or NASKA rules.The difference for me is the fighting style, I have to use another fighting stlye in Europe and States because of the rules.
CENTURY-EUROPE: What had been the biggest success as a pro Martial Arts Athlete?
Laszlo: The biggest succes for me. maybe the World Combat Games in Russia, I will never forget, when I won it. In the final I fought against Marc McDermott from Ireland. It was a really hard and close match till to the end. 50seconds before the over time I kicked his face and this situation was, when I felt: this is my time.
CENTURY-EUROPE: What was your most memorable fight in your carrier so far and why?
Laszlo: I can not say only one match, but I could think about many fights when I had the chance to fight with the greatest Pointfighters in the Business. Ive fought with many great athletes like Raymond Daniels, Michael Page, Jack Felton, Robbie McMenamy, Gregorio Dileo, etc. Every fight was memorable for me, because of the experience what I got from.

CENTURY-EUROPE: Do you think, that the recent COVID-19 situation will change the way of how Martial Arts schools/gyms will offer classes long-term and what could be the biggest challenge?
Laszlo: This situation can help to open for the online trainings, in one part I think it is really good, beside all the bad circumstanzes. In the States my team mates do Skype lessions, which is in Europe not so popular. this training can help to be in good shape, but it cant replace the real training in Dojo. We talk about contact sports which can spread the virus, so I think the best way right now, to use punching bags as an alternativ solution. For example I train with an Century Wavemaster free standing bag to keep me fit.
CENTURY-EUROPE: What are your plans for the future after you will leave the mat finally and what are you doing beside the competition, or do you have specifics projects?
Laszlo: Of course I have. At first I have my current project "BE MORE BE CHAMPION" fighting system. I travel around the world to teach with my program. I would like to share my Pointfighting knowledge with the todays and future fighters. One of my biggest projects in the future is to make Century Martial Arts big in Europe. I joined as an ambassador to Century Europe, because I believe in their products, equipments and unique product development. I travelled around the world and used very different equipment and everytime when I am on the CENTURY Martial Arts SuperShow in Las Vegas with Team Paul Mitchell, I see what CENTURY is doing for the Sport and what tehy are inventing every year. There are not so many companies out there, which are doing similar - maybe not another one. I have a big secret plan too, and I work with Markus Liedtke hard to make this plan possible, and hopefully I can talk about it in the early future.
News / Blog
Please login to comment.