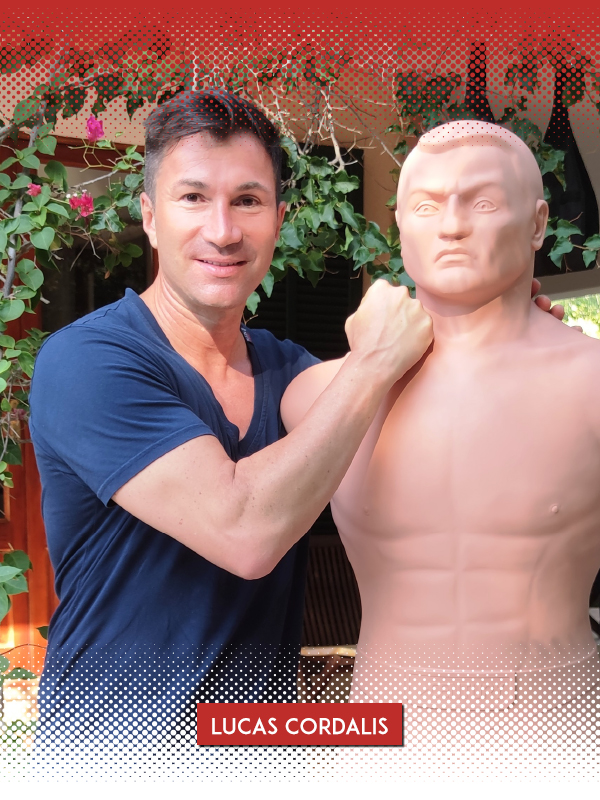 CENTURY Martial Arts is martial arts history: Founded in 1976 by US martial arts master Michael Dillard, Century began as a one-man business. His parents' garage was his workbench and his van was his showroom. After earning black belts and awards in many styles over the course of his martial arts career, he knew that success requires dedication and hard work.

The high-quality products have been used and co-developed for years by some of the greatest martial artists such as Chuck Norris, Joe Lewis, Bill Wallace, Herb Pérez, Mike Swain, Ernie Reyes, Ricardo Liborio, Mike Swain, Mike Chat. In addition to many UFC champions like Matt Hughes, Hollywood stunt performers like Caitlin Dechelle (stunt double for Gal Gadot in Wonder Woman) are also users of the CENTURY Martial Arts brand.

Markus Liedtke, the CEO and Managing Director of the European division of Century Martial Arts, has now succeeded in engaging the singer, music producer and composer Lucas Cordalis as a testimonial and exclusive brand ambassador. We are very proud to have Lucas join our company. It fits perfectly into our European expansion concept and our existing portfolio of prominent brand ambassadors from sports and entertainment. I am very much looking forward to our long-term cooperation. Century and Cordalis - that fits! , says the CEO of CENTURY Martial Arts Europe GmbH.

Lucas Cordalis on the conclusion of the contract: In Century Martial Arts Europe I have found an ideal partner for me. I use the sporting goods and training equipment every day to keep and improve my physical fitness. I am very much looking forward to our intensive cooperation."

Classic fitness training, but also Brazilian Jiu-Jitsu, Jeet Kune Do, Karate, Taekwondo and Kung Fu are possible with the products of Century Martial Arts Europe and can also support cross-fitness and yoga. The focus is on the passion for martial arts and fitness. Martial arts can change life fundamentally. Century Martial Arts Europe is all about commitment to that passion. Based in Oklahoma City, CENTURY Martial Arts is a martial artist-run company that designs and manufactures martial arts equipment. Century is the shop for all martial arts, whether you need boxing or kickboxing gloves, a standing punching bag, a Gi or sports karate equipment. The company even offers tactical self-defense equipment and study aid products for preschoolers. In addition, there is also a large selection of high-quality martial arts articles, such as martial arts uniforms and belts, which are manufactured directly in our own factory.

The original Wavemaster® standing punching bags, fitness equipment, sparring equipment and much more - CENTURY invented the world's first standing punching bag 25 years ago and went down in history when the first free-standing, best-selling punching bag with a human body was developed - the BOB, which became a trademark. BOB gave birth to many "children" in his lifetime, such as the BOB XL, VS.BOB, Bobby Bully and many more. For this reason, this outstanding MADE IN USA product, the BOB, can be seen frequently in numerous Hollywood film and television productions (The Boys, Cobra Kai, Law & Order, etc.). You could say that the CENTURY BOB is one of the precious statists in Hollywood.

In 2019, the owner and the management team of CENTURY USA decided to found CENTURY Martial Arts Europe GmbH, based in Dortmund, with his long-term German partner Markus Liedtke. With the logistical experience and the central European warehouse in Dortmund, an optimal service is guaranteed. Since then, European martial artists, trainers, clubs, dojos, fitness studios have been able to buy the attractive articles and the latest innovations from Century here. Century offers everything that is needed for optimal training. Century's martial arts catalog offers a wide range of practice and show weapons, mats, patches, sparring equipment and other products. Century works with several brand partnerships such as GAMENESS, PUNOK or the renowned BLACK BELT magazine and has cooperations with the PAUL MITCHELL Karate, Rock Steady Boxing, Bruce Lee Foundation, USA Karate, "Kids Kicking Cancer" or "Fight for the Forgotten" team together.

Lucas Cordalis grew up in Germany as the son of the Greek singer Costa Cordalis and his wife Ingrid. As a child, he occasionally appeared as a choir singer in the production of new songs by his father, including the popular hit Anita. With the song Viva la noche he began his musical career in 1997 together with his well-known father and sister Angeliki Cordalis. He also appeared again and again as a soloist (e.g. in the MDR program Kleeblatt). In 2004 he took part in the Star Duell show with nine other celebrities.

In 2002 Lucas Cordalis moved to the Spanish Balearic island of Mallorca, where he founded his record label Supersonic Entertainment Mallorca and a recording studio. So far ten million records have been sold, in which he was involved through compositions, texts and CD productions. There were also several platinum and gold awards. With David Hasselhoff, DJ Bobo and other well-known artists, he has so far worked as a producer and remixer in their own studio. Cordalis composed a hit with Baby Come Back by the group Worlds Apart, which was released in 15 countries and entered the top ten and sold more than two million units in France. When his father became the jungle king of the RTL show "I am a star - get me out of here!", He produced the single jungle king, which was in the German top ten of the single charts for eight weeks. In October 2014 Cordalis got into the ring at ProSieben Promiboxen against Marcus Schenkenberg and still won after being inferior by a technical knockout. On March 14, 2015, he took part in the TV Total Wok World Cup.

In 2018, Cordalis won the second season of Global Gladiators. On March 16, 2019, he took part in the ProSieben program Schlag den Star, in which he competed against Paul Janke and won the prize money of 100,000 euros after 15 games. Lucas Cordalis is currently taking part in the big RTL donation marathon as a project sponsor. More than 6 million euros have already been collected for children in need. Century Martial Arts Europe is at his side with advice and action for other charitable projects by Cordalis.

Lucas Cordalis was honored with the German music award Schlagerdiamant and the former television award Golden One of the ARD.