BOKATOR: THE MARTIAL ART FIGHTING ITS WAY BACK FROM THE DEAD

As mixed martial arts enjoy increasing popularity throughout the world, there is one martial art that is struggling to become known. Bokator is an ancient martial art from Cambodia that was all but extinguished during the reign of the Khmer Rouge from 1975 to 1979.

The repressive Communist government tortured and killed intellectuals, artists and others it considered subversive, including many who practiced bokator. Those who remained did not dare acknowledge the discipline, let alone teach it to others. Today, bokator is again being practiced in Cambodia by a small yet growing number of followers. Here’s an overview of this little-known martial art.

Bokator was developed in the Khmer Empire’s capital city of Angkor, which thrived in Cambodia between the ninth and 15th centuries. Warriors invented it for use in combat and self-defense. Sculptures at the Angkor Wat temple complex, which dates to the early 12th century, depict the art. 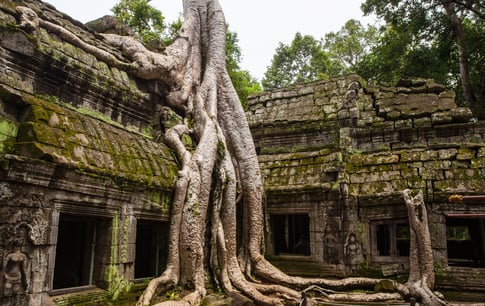 An external view of part of the ancient temple of Angkor Wat.

Fighters also wear red and blue silk cords around their biceps and heads. These cords, known as sangvar day, were initially said to be enchanted and endowed the wearer with great strength.

Belts of Many Colors

In Cambodia, students of the art must earn their kramas, the scarf that is to bokator what belts are to other martial arts. Like other martial arts, bokator starts with white and moves through a progression of colors (green, blue, red, brown) up to black.

Bokator is based in part on how animals live in nature, and it incorporates 10 different animal styles. At the white krama level, students learn the first five forms:

Green-level fighters learn the next five:

The art also incorporates several practical fighting techniques, including the use of weapons like short sticks and bamboo staffs.

Students incorporate every part of their bodies in fighting, which is perhaps why there are so many moves to master. They use fingers, jaws, hips, head, feet, elbows, knees and more to overcome and subdue opponents through striking, kicking, trapping, feints and ground fighting. A match in Cambodia ends when an opponent is in submission or has been choked. As a real combat discipline, bokator can be used to fight from a variety of positions, including kneeling, sitting, standing and laying down.

Early fighters wrapped their wrists and hands in rope just past the main knuckles, leaving the fingers free. Along with protecting these vital body parts, the rope added an extra punch to their punches, giving fighters a broader and firmer surface area to aim at opponents. Today’s fighters wear a thin glove beneath the rope.

The 2018 documentary, Surviving Bokator, is a must-watch for all martial arts fans, of any style. It tells the story of the Grandmaster and his students as they travel to compete internationally, and bring bokator back to the world's stage:

Bokator Has a New Beginning

Helped greatly by bokator’s Grandmaster San Kim Sean, the martial art is experiencing a rebirth. Its reappearance is due to many factors, including the popularity of mixed martial arts:

The government has also acknowledged its cultural importance, incorporating its teaching into junior-high physical education classes. With growing awareness of the ancient art, training centers have begun appearing throughout Cambodia as old masters share their knowledge with a new generation.

It's the sports camp for every fitness level! Here you can spend a week doing the best for your body, your mind and your soul. Here there is sun, sport and good humour. That's the promise of the Women's Health Camp.